7 Effective Ways To Speak English Posher Than The Queen 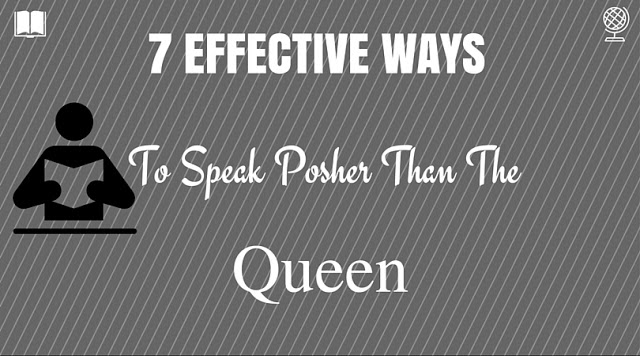 What Is The Queen’s English: Definition

Many people who come to learn English in the UK often say: I’d love to speak like the Queen! She speaks perfect English! But does she actually use the language in the way we imagine she does?

English schools in England certainly don’t have English courses which specifically teach the ‘Queen’s English’. After all, what exactly is the Queen’s English? Many dictionaries define it as the language which is spoken by educated people who live in the South of England. Not surprisingly many people in the North would probably take offence at such a definition! Very few people, well-educated or not, actually use English in this way, even those from an upper-class background whom you might expect to do so. A few observers of the Queen feel that she doesn’t either.

If, however, you did want to use the Queen’s English, then how would you go about it? Listed below are seven effective ways to speak English posher than the Queen does!

1. Try to avoid using slang or jargon and keep the language ‘plain’. This is probably much easier said than done, especially since there is a certain amount of disagreement as to what is ‘correct’ language.

2. Always adhere to punctuation rules when writing. With the advent of social media, the correct usage of punctuation has gone out of the window. Only in more formal documents such as reports and instruction manuals is it being maintained.

3. Respect all grammar rules. There is a certain amount of debate as to whether it is necessary to use exactly the right structures to communicate effectively, but if you want to speak the Queen’s English then you should do so.

4. Use a more formal style of address. This was very true in the past, while as today this way of speaking to people may lead to bemusement as much as anything else.

5. Speak with an ‘old fashioned’ form of pronunciation. The Queen’s English is also associated with the way words are actually said, with a type of southern English accent called ‘Received Pronunciation’. Even here it is felt that the present Queen’s accent does not conform entirely to how she ‘should’ sound. Certainly if you were to watch newsreel footage taken when she first became Queen in 1952, there is a noticeable difference in her accent.

6. Read books written in the 19th century, especially by Charles Dickens (born in Portsmouth). These often have lots of ‘correct English’ in them. However, be careful as even here some characters use decidedly non-Queen’s English.

If you follow all of the above advice then as they say:

‘You’re gonna speak real good English, like what I do!’P.S. Please note the last sentence is definitely not the Queen’s English.