A very sad good bye to Allan – LSI won’t be the same without him!

Home » Blog » A very sad good bye to Allan – LSI won’t be the same without him!

Allan Gray has made his last pitch as Sales Director for LSI and is leaving. We spoke to him just before he finally locked the door of his office for
one last time; Allan Gray along with his brother Peter Gray started Language Specialists International in 1986.  Together they ran the school until selling it to Neath and Port Talbot College in 2010.
“Very few people know that you spent time in Prison, Allan. How did that happen?”
“Well let’s start with the teaching and LSI, shall we? I suppose my first experience in teaching would be in 1969, when I was taking a gap year, completely broke, entirely unqualified and in Madrid! … Then moving on a bit, I started working in tourism and from there I was in the Emirates (from 1976 to 1980) working in freight forwarding.  At the time I was making reasonable money and I knew Peter was at a loose end back in England. I sent him a ticket, told him to come out and see me, and said that he could stay as long as he wanted.  In fact he actually stayed for nearly 9 years!
Almost immediately he got a job teaching and found that not only was he a natural but he really enjoyed it.  I had to move to the Northern Emirates and I suggested he start his own operation, (It was around 1979, I would have been about 30 at the time and he would have been about 22). With some help and a business plan he started a school in Sharjah and within 2 years he had virtually
conquered the whole of the Northern Emirates! He discovered he had an absolute talent for developing, building and managing language schools. He was a natural genius!  Peter stayed and I left the Emirates and went back to Holland as Regional Sales Manager for TNT with my wife and son.
Three years down the line he decided he wanted to open a school in the UK and asked me if I wanted to go into partnership with him as the Marketing Director.  At that time I had had enough of what I was doing and really liked the idea of working for myself, and that is really the origin of LSI!
We found a place in Bosham, near Chichester, and in March 1985 we set up the Chichester English Study Centre. Peter did all the groundwork, and the background stuff, but you know when we started we were just a catastrophe waiting to happen!  What we knew about running a business in the UK could be written on a postcard and still leave room for the stamp. The business side just
didn’t translate from the Middle East to the UK, and from making just about every mistake possible (including the name of the school – try saying that when you have had a few glasses of wine!) we very nearly went bankrupt very quickly.

After two years we decided we had to move. We took a blank sheet of paper and identified all the things we wanted for a location and made a list of all the mistakes we had made and tried to learn from them.  Eventually we found that Portsmouth was the only place that met all the criteria. In April 1987 we moved to Portsmouth and became Language Specialists International.
I suppose the lowest point was the first Gulf War when every single one of our bookings were cancelled.  We only had two students in the school, both French and both called André and we really thought we were going to go under. Thankfully it all started to pick up again. 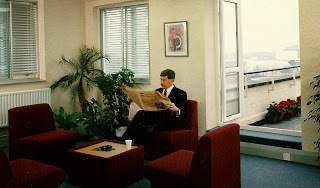 The highest points? It’s actually been a wonderful experience, I have had the privilege of working with absolutely lovely people, doing a job which for most of the time has been enormous fun.  I was not rich, I am still not rich but most of the time I have been able to live rich!  I have travelled all over the world, stayed in wonderful hotels, met really interesting and lovely people, you can’t call that a bad life! It is really hard to put your finger on the highest point, but maybe it was when we found out we had sold our previous building at a really good profit and were able to move into our current building (May 1997) which is massively bigger, do it up how we wanted and be massively proud.  Probably the highest point in my career as the company salesman was the day we signed our biggest training contract.  I was dancing down the street, singing at the top of my voice, heaven knows what the locals thought of me! And… we still have that contract today.
How do I feel about leaving? Very mixed, quite schizophrenic. This is my baby, I have spent 29 years of my life bringing it up so it feels very strange. But professionally I suppose I feel that I have achieved everything I set out to and some, and I want to use the motivation and energy for other things now. The job hasn’t changed much, and maybe it’s time to move on.
The answer to what I’ll miss the most and the least is the same thing, it’s the people. I will miss the fun and interaction, I love being able to outrage people, but on the other hand, I am a bit of a maverick so managing a team is sometimes a bit challenging, the two things don’t necessarily go together. 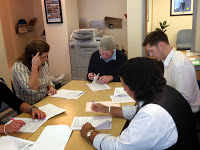 If I could change anything about the history of LSI? I think that would be starting a school with the knowledge that we have now!
The best piece of advice I could give to anyone going into marketing? I would say learn about your customers and listen to them.
Outside of LSI I love travelling, cooking, reading, my family and friends and my adorable grand daughter, and so I’m looking forward to spending more time on those things. So my plans for the future? I would say Gin and Tonic in the right hand, buttocks in the sand and iPad in the left hand.
And back to the prison time?  Well it was in the Emirates. It was only for a few hours but I had stopped a cheque which at that time there was illegal, but it got sorted out very quickly.
LSI will just not be the same without Allan, it wouldn’t have existed if it hadn’t been for his extraordinary talent, and he is going to be missed enormously by all of those
who have been lucky enough to get to know him.
Bye Allan – and thank you!