British Culture: How to Understand Cricket

With the start of the cricket season in England, we thought it timely to post a blog about this most confusing of games (smile).

If you look out of the side windows of LSI Portsmouth, you can often see a strange English ritual being performed. This is the game of cricket. If you can’t understand the game, this is quite normal.  Many English people don’t understand it either. In addition to hitting a ball with a “bat”, it involves six vertical pieces of wood being stuck into the ground with smaller pieces of wood sitting on them. Players move around, take up positions, leave, or enter the playing area with no apparent logic. Some players occasionally jump in the air, wave their arms around, and, as if possessed by a spirit, shout “howzat???!!!”. On other the hand, it’s possible to play cricket without doing much at all apart from standing, hopefully, in the right position. 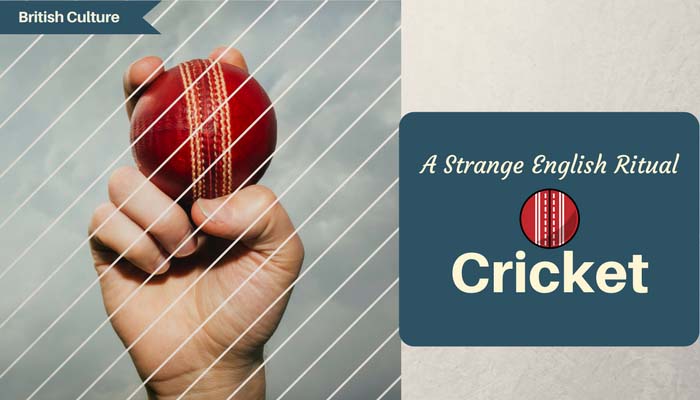 We could try to explain the rules but that would take too long and would probably confuse you even more. The length of the game can vary between a couple of hours to five days, frequently with neither side winning!

Another problem is that cricket has its own language. It involves scoring “runs” and getting players “out” not to mention ”maidens” and “night watchmen”. The position a player stands in can be “square leg” or “silly point”. Cricket also provides many idioms – see below for some of the more common examples.

In addition to people wearing white or cream, cricketers sometimes also wear brightly coloured tracksuits and spectators at international matches appear in fancy dress, for example, a group may be dressed as nurses. No wonder supporters of the English cricket team are known as the “barmy army” (barmy = crazy).

The fact is that this game is played by millions of people around the world and is watched by millions more. The question is: why? All that can be said is that some people find it fun to spend all day trying to catch a fish in freezing temperatures. Many find it quite satisfying to hit a ball with a bat, and what could be more pleasant than sitting in a deckchair looking at a beautiful field and listening to the sound of a leather ball on a willow (type of wood) bat, while eating cucumber sandwiches and drinking Pimm’s. Or maybe it’s just the English!

Watch TV to Improve your English Listening – with Jack...

Listening to the TV for your English Of the four communication skills (speaking, listening, reading and writing), many people find listening to be the most challenging. With listening you have to t...