British Culture: Our Love of a Good Cuppa (Cup of tea)

Home » Blog » British Culture: Our Love of a Good Cuppa (Cup of tea)

It is often said that when the British don’t know what to do, when they’re feeling miserable or if they’ve got five minutes to spare, that they put on the kettle and make themselves a cup of tea. Though other drinks, like coffee for example, are increasingly popular, it is certainly true that the British do still love a ‘good cuppa’ (a cup of tea). As a drink it cuts across class lines, being drunk by working and middle-class people alike.

In fact, they love tea so much that on average 165 million cups of tea are drunk each day! Most British tea comes in the form of tea bags, mainly due to considerations of time and convenience. Some of the most popular brands of tea are Yorkshire Tea, PG Tips, Tetley and Twinings. However, go to any supermarket in this country and you will find a huge range of tea, both in the form of teabags and loose leaf tea. Whilst breakfast teas or black tea are still by far and away the most commonly drunk types of tea, a lot of people in Britain today drink fruit or herbal teas, partly for health reasons but also as a result of fashion. 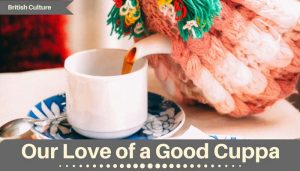 Tea has been drunk in Britain since the 17th century, though its present popularity started with the Victorians in the second half of the 19th century. Once the preserve of the rich, it is today a highly affordable drink.

Unlike many other tea drinkers around the world, most British people prefer to drink tea with milk, sometimes adding sugar, or if they don’t add milk possibly with a slice of lemon. At home tea tends to be drunk out of a mug, whilst in a café or a restaurant it comes in a cup, normally with a saucer. The hot water for the tea is nearly always boiled in a kettle, the one piece of equipment that you will find in every household kitchen and workplace in the country. When making for a larger number of people it is still quite common to make tea in a teapot. Being eccentric some British people like to put a tea cosy on the teapot so as to keep the tea hot.

Though the stereotype is to imagine that the British tend to drink tea at tea time in the afternoon, tea is drunk at any time of the day. After all, when the British want to have a drink, which drink do you think they automatically think of first?