When you think about the UK, what most symbolises the country? The Royal family, fish ’n’ chips and the Union Jack (flag) all come to mind. So too would our red post boxes, double-decker buses, black cabs and red telephone boxes. Though all of these things can be found in every other city in the world, there is something very appealing about the British versions. Much of this appeal is linked to people’s perceptions of traditional aspects of British culture. Though much has changed, for better or worse, these four examples of our daily life have remained remarkably timeless. 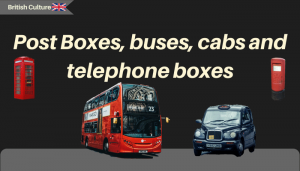 Red post boxes first appeared in London in 1874 and within 10 years all post boxes in the UK had been painted this colour. If you look at the front of the post box you will notice two large letters. These are the initials of the reigning monarch (at the time that the boxes were placed) the first being VR or Victoria Regina. The ones placed during the last 65 years have ER or Elizabeth Regina on them. Over time the post boxes are replaced with newer ones, but you can still find examples of the older ones. There are still three of the VR boxes in Portsmouth. Have you seen them?

Double-decker buses have been around for a long time, the red ones of London being some of the most famous, with every city and many towns in the UK having them, normally in different colours. This type of bus tends to be more popular than the longer buses found in other cities round the world, probably due to the narrower streets found in this country.

Black cabs (officially known as Hackney cabs) can be found in most British cities, with vast numbers to be found on the streets of London and other major urban areas. The cab drivers in London are expected to know every street and are required to take a test called ‘The Knowledge’ before they are allowed to drive a black cab. This involves memorising 60,000 streets and 100,000 places of interest! It normally takes between 2–4 years to pass the test.

Though most people have mobile phones today, there are still a certain number of telephone boxes to be found, mainly in cities and towns. Unfortunately many of the famous red boxes, with their heavy, difficult to open doors have disappeared. However, a lot of small villages have kept their boxes, even if in some cases they don’t actually work any longer!

The fact that you can go around the world and come across all of these symbols of British culture says much about how highly regarded they still are.