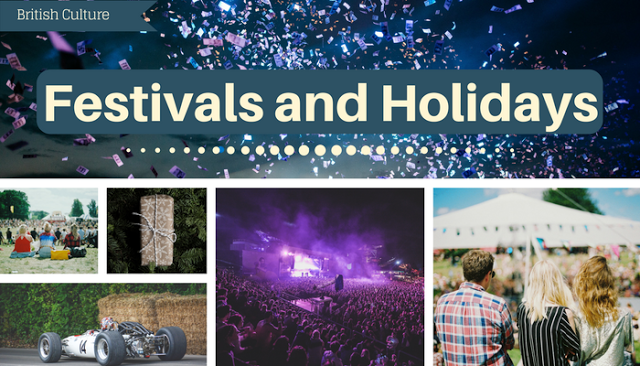 Like any country, the UK has plenty of festivals and holidays, some national and others regional. Here are some of the more common/unusual ones.

This is a celebration of Scotland’s most famous poet, Robbie Burns. On this day throughout Scotland there are lots of events, many of which involve bagpipe playing, the singing of traditional songs, the eating of a classic Scottish dish, Haggis, as well as the drinking of a certain amount of whisky! To know more click here

By far and away the most famous music festival in the UK, Glastonbury has now been going since 1970. Over the years many of the world’s most famous groups and musicians have performed here such as the Rolling Stones, Adele, David Bowie and many others. In addition to the music, there is theatre, comedy, dance and many other forms of art. More information here

This is a two-day music festival held on Castle Field and Southsea Common. The 2017 Festival may be attended by as many as 200,000 people and will have acts such as Madness and Stereophonics. More information here

If you like cars and racing then you are going to love Goodwood. Many of the latest sports and high-performance cars are on display or racing around, and numerous famous racing drivers are on hand for racing enthusiasts to talk to.

Boxing Day (26th December) – UK wide
While in many countries the day after Christmas day is a return to work, that’s not the case in the UK. We have another day to recover from all we’ve eaten and drunk on the 25th! But why exactly is it called Boxing Day? Well, there are many theories but one of them is that in the 19th-century servants and others, who had to work on Christmas Day, were given the next day off as a holiday and in addition they were given a box by their employers which contained a small present. To know more click here

Some of our favourite pubs in Portsmouth

Did you know that Portsmouth has more pubs per square mile than any other city in the UK? It's true. We don't know if that is a good thing or a bad thing, but what it does do is give an excellent ...

Living and Working in Portsmouth – An Insiders Guide!

My Experience in Portsmouth A while back Sandro Rogger came and studied and worked with us for a while - and wrote the following ;-). I was given the opportunity to spend one month at LSI Portsm...