The Queen may be the most quintessentially English thing that exists but after that must come pubs. They are also a very personal choice, so this week we asked Michael B, the teacher, to give us a list of his favourite pubs.
Michael says:
“What is the perfect pub? If you asked 10 LSI Portsmouth people you’d get 15 different answers!
For me it needs to have a good range of beers and other drinks; it doesn’t need food (well, maybe some snacks though); it doesn’t need music or a TV screen; a garden helps (though this is difficult in Portsmouth); 70% of the clientele are locals; bar staff are friendly, but they’ll leave you alone if you so wish.

How to choose from the 160+ pubs in Portsmouth (a great resource for the history of the current pubs and many of the long-lost pubs is http://portsmouthpubs.org.uk/)
For some people, it is the 8 pubs and bars in Old Portsmouth.

For others the 20 or so bars and pubs on the Albert Road, from One-Eyed Dog on Elm Grove to the Sir Loin of Beef on Highland Road.

For some others, the dozen or so bars and pubs around Palmerston Road.

What follows though is a personal choice of the more quirky pubs:

1) The best views over Portsmouth – The Churchillian on Portsdown Hill
Don’t forget the views north over The South Downs, once part of the Royal Forest of Bere, as well as the views south over the island of Portsea (Portsmouth); Portsmouth harbour; Isle of Wight in the distance; Hayling Island to the left (east)
Directions: catch a No 7 or No 8 bus to the top of the hill above QA hospital to the George Inn bus stop; double back and walk past The George Inn (or pop in for a drink!) cross over and walk up the hill and cross over again to the open parkland and the carpark and cross back over to the pub (always look right, then left, then right again when crossing this busy road!) 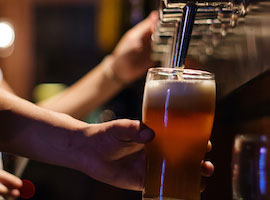 2) The best waterside – The Still and West on Bath Square
with Portsmouth’s own Romeo & Juliet story – sort of (John Main of The Still Tavern married Elizabeth Long of the East & West Country House and formed the Still & West !) – see the notice on the building’s exterior; painted ceilings and fish & chips on paper on your table!
Directions: go to Old Portsmouth (No 1 bus will get you there), follow The High Street round to the Point and follow around past The Spice Island Inn to the pub

3) The quirkiest garden – The Barley Mow on Castle Road
Pub with a great range of beers of all styles (hand pumps of real ale!); a quirky bar billiards table; fresh eggs to buy; a prize-winning garden (In 2016 they were in the top of Britain’s Best Beer Gardens [organised by SME insurance])
Directions: go south from Kings Street/Elm Grove on Castle Road towards the famous Clocktower (the one without numbers on its clock face, just letters which read Ernst Smith)

4) The most bizarre building – The Auckland Arms on Auckland Road West/Netley Road;
bizarre as it is two house back to back that don’t share any architecture! Inside is a typical Pompey local pub; regularly has ukulele sessions; well-kept beer; never too crowded.
Directions: it is between Osbourne Road and The Common, behind The Queens Hotel on the corner of Netley Rd (from Osbourne Rd) and Auckland Rd West (access from Clarence Parade)

5) The best for music – The Vaults/The Wine Vaults on Albert Road
This popular pub on Albert Road with the wood interior décor and many rooms, and dozens and dozens of craft beer, as well as the regular beers from the London brewery Fuller’s; regular music nights, include Tuesday with jazz or folk; Thursdays with rock, blues, R&B, or soul.
Directions: find The King’s Theatre and it is directly opposite! (41-47 Albert Rd) 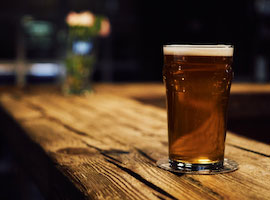 6) The best for the Christmas ponies! – The Phoenix on Duncan Road behind The King’s Theatre with its two bars – one is strewn with photos of actors from the past – an overflowing garden & a games room that is used every 2 years to stable the ponies used for the Christmas panto at the theatre!
Directions: off Albert Road, behind the theatre (either take Exmouth Rd and turn onto Collingwood Road or take Duncan Road at Chilli Tattoo parlour opposite the Co-op on Albert Rd)

7) A Champion pub – The Hole In The Wall
voted by CAMRA the best pub in the Portsmouth area 7 times in the last 10 years; no music, no TV, no slot machines, changing beers (every week is like a beer festival), beer clips on the ceiling, hops decorating the place, a snug room behind the bar, no garden, dark and friendly; even has a beer named after it (Hole Hearted brewed by Fallen Acorn from over in Gosport
Directions: Off King’s Rd/Elm Grove on Great Southsea Street (no 36) halfway down before the famous Clocktower. It’s easy to miss! (current CAMRA PSEH Pub of the Year- and Cider pub of the year – is The Lawrence Arms, 63 Lawrence Rd, off Albert Road) 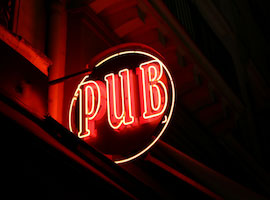