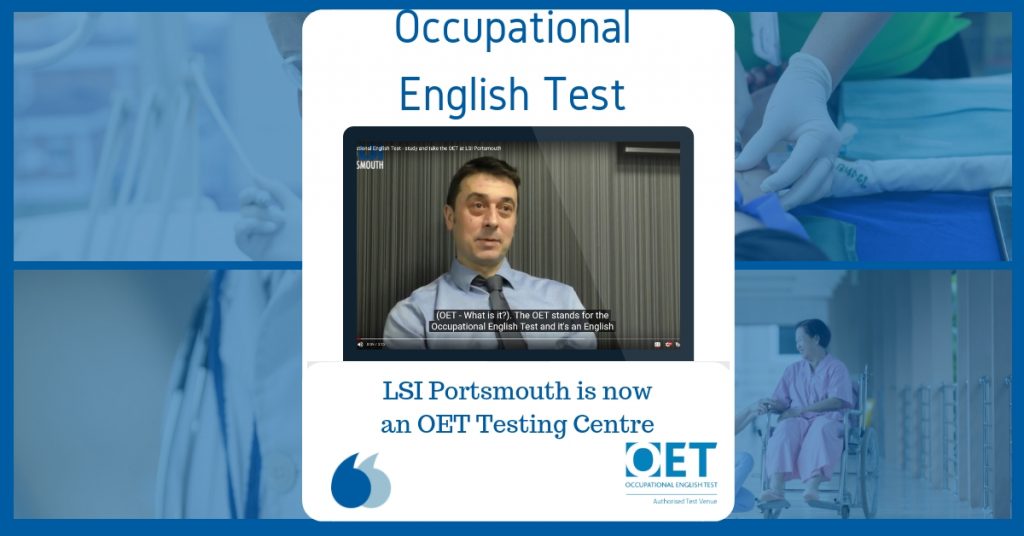 We spoke to Lewis Richards the Director of Studies for Exams and asked him to explain what OET is and how LSI Portsmouth is involved.

The OET stands for the Occupational English Test. It is an English exam that’s designed for medical professionals for example doctors, nurses and so on, to prove their English level, essentially so that they can work in English speaking countries as doctors or nurses.

Who is the OET for?

So the OET is aimed at people who are already qualified as medical professionals. We’re going to be running courses for nurses, but there are 12 different versions of OET. There is a test for doctors, dentists, nurses and so on. So people who are already qualified as nurses for example but who then need to get proof that their English is good enough to work with patients in English speaking countries.

What do people in this position do at the moment?

So at the moment, most people who are in this situation take an IELTS exam. You can still do that but the difference really is that IELTS is an exam that is taken by anybody who wants to prove their English level for either studying or for work, it’s not specifically medically related. The OET is specifically related to medicine, so, for example when you are doing the reading test of OET the texts are medical articles, patient notes things like that. The speaking test for OET is two role plays where you’re roleplaying with an interlocutor who is a patient. In this way, you are doing what you would do if you were actually doing the job. It’s very specific to medicine that’s the difference between the OET and IELTS.

Is it marked in the same way or differently to IELTS?

So the interesting thing about the OET test is that in the speaking test particularly, you’re marked in two ways. One is the normal way; your grammar, vocabulary and your pronunciation but you are also marked on your communication skills. So your ability to have empathy for the patients, for example, to listen to them. The kind of soft skills that you would really need when you are working with real patients is also tested which I think is great.

Could you explain how LSI Portsmouth is involved?

LSI Portsmouth has just become an official OET test centre.  Actually, we are the only test centre in this area in the south of England. We’re going to have our first OET test on March the 16th.  We are also going to run courses for OET. We’re going to run one-week intensive OET preparation courses, so a 25-hour crash intensive course the week before each test, so you come and study from Monday to Friday intensively to prepare for the exam, and then you do your exam on the following Saturday. We have 14 test dates per year and we’ll have a course that runs for a week before each one.

If you want more information about the OET test at LSI Portsmouth?

Have a look on our website, we have an OET test page and an OET page for the courses.