The Development of the English Language

Home » Blog » The Development of the English Language 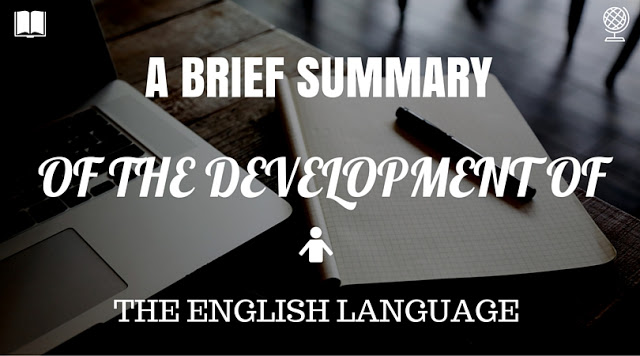 A Brief Summary of the Development of the English Language

For people who wish to learn English, the development of the English language is in some ways an untold story. Even for those who speak English as their native tongue, many do not know its origins.

So, where does the language that we use today come from? Like all languages, English has gone through a succession of changes. Much of the basis of the language came about during early medieval times (5th – 11th centuries) with the arrival in Britain of Germanic tribes from what is today Germany and the Netherlands. Their collective language was called Anglo-Saxon or Old English. Examples of Old English words are: I, you, good, name, woman, make, yes, and many others.

The Viking invasions of Britain during this period also led to the inclusion of words from Old Danish and Old Norwegian such as: get, husband, knife, take, want, window and lots of others. In total over 25% of English words are of Germanic or North European origin.

With the arrival of the Normans in 1066 the language began to change with the addition of Norman and Old French words. The period from then till the 15th century saw the population of much of Britain speak what we would call Middle English. Norman and Old French words include: beef, soldier, finance, music, blue, theatre and literally thousands of others. Nearly 30% of English comes from these two languages.

From the 15th century English has continued to evolve into what is now termed Modern English. As a result of the influence of countries which were once part of the British Empire, English has taken on board plenty of words from Asia, Africa and the Caribbean. The experience of travel on the part of native English speakers and immigration to English-speaking countries from non-native English speakers has resulted in more words coming into the language from the Middle East, Italy, Spain and elsewhere.

Throughout the centuries medical and scientific terminology, and not just in the case of English but also other European languages, has been heavily influenced by both Latin and Greek.

It must also not be forgotten that while there are plenty of similarities between the English that is spoken in the British Isles, North America, South Asia and Australasia, there are some noticeable differences as far as pronunciation, vocabulary, and to a lesser extent grammar, are concerned.

With the advent of new technology and platforms for using the language such as the Internet and social media, as well as an ever-changing and multi-cultural world, English will continue to evolve in the future. It is quite possible that the English that is spoken in a couple of hundred years’ time will be very different from that which is used today.