Where are they now – Hiwa from Kurdistan

Home » Blog » Where are they now – Hiwa from Kurdistan 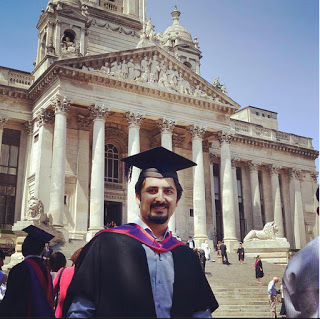 Hiwa had his MA in Fine Art Final exhibition at the University of Portsmouth last week.  We thought it would be nice to show some of his pictures here.  He explained how learning English opened up a whole new world of art to him, as there had been relatively few art books in his own language available.

We were delighted to catch up with Hiwa recently, who attended LSI Portsmouth from 2012 until last year. He went on to attend Portsmouth University to study fine art.

“Well, I had such a great and fantastic year at Lsi, met so many good people.. friends and teachers which i always appreciate that lovely time I had with them .. ” I started October 2012 in IELTS course .. In the morning with (Nick Rickard) and afternoon (first week with Yvonne) then moved to (Rebecca Scott-Becky) .. I stayed in that course until I got 5.0 in IELTS and changed to General English. So, my teachers in G.E were (Kelly, Edmond, Robyn and Nick Rickard) .. After couple of months holiday I started in Pre-sessional course in May 2013 (Becky Elliott) in the morning and (Jessica) in the afternoon .. Until finishing and moving to Uni .. I was at Lsi for almost 10 months”

This is how Hiwa describes his art:

Makes paintings, photos and drawings. By rejecting an objective truth and global cultural narratives, Perdawood creates with daily, recognizable elements, an unprecedented situation in which the viewer is confronted with the conditioning of his own perception and has to reconsider his biased position.
”My work urges society to renegotiate painting as being part of a reactive or – at times – autistic medium, commenting on oppressing themes in our contemporary society. By exploring the concept of landscape in a nostalgic way, I investigate the dynamics of landscape, including the manipulation of its effects and the limits of spectacle based on our assumptions of what landscape means to society. Rather than presenting a factual reality, an illusion is fabricated to conjure the realms of society imagination.

Moreover, to establish a link between the landscape’s reality and that imagined by its conceiver. These works focus on concrete questions that determine our existence. By applying abstraction, I create intense personal moments masterfully created by means of rules and omissions, acceptance and refusal, luring the viewer round and round in circles.
Also, work doesn’t reference a recognisable form. The results are deconstructed to the extent that meaning is shifted and possible interpretation becomes multifaceted. Currently I live and work in Portsmouth – United Kingdom”.